I go through phases: nachos, hamburgers, butternut squash soup, Caesar salads . . . . But French onion soup is here to stay. So due to popular demand (I was asked via the Insta how I made my restaurant-grade Instant Pot French onion soup), here is the recipe for making this onion-y goodness for about $2 a bowl.

As someone who cooks a lot, I know that the cost of French onion soup at a restaurant (like the price of a cheese plate) can be highway robbery. As off-brand as this may seem, living, transportation and FOOD are your biggest expenses. So like our hamburger article that could severely help your retirement, think about other swaps, and what compounding could do for you if you invested the savings.

This recipe is basically stock + onions + thyme (with bread or croutons + cheese on top). It is SUPER easy no matter how you cook it. It’s also very forgiving if something doesn’t go according to plan or if you want to spruce it up with your own flare. I cook because I enjoy cooking, I know what’s going into my food, I use better-quality ingredients, and it’s CHEAPER than eating out/ordering in.

Just FYI: I cook sorta the way my imaginary grandmother would be dictating over the phone. Oh, just a pinch of this to taste, oh, you know, a dash . . . Thanks, can you tell me tablespoons or some normal, quantifiable metric? I’m trying.

So how it works:

As Britney and RuPaul say, you better work [bitch]. Chopping the onions is the first (and only work) part, which you should do while you heat up the Instant Pot on its sauté function. Don’t cry, you’re saving money . . . oh, that was just the onions. Cut them small enough to be manageable by spoon. Once the pot is warmed, put the butter/oil with the brown sugar (this really helps the carmelization process) for about a minute, before you put in all of your freshly-chopped onions.  After a few minutes (3?), add the garlic, herbs, Worcestershire, and optional booze (the latter should fully burn off quickly, so it’s still kid-friendly, or abscond as I did). Once the onions are soft and flimsy (and brownish, despite some chefs saying not to brown them, so it’s your call) after a few more (2?) minutes, add in the stock. Most of the work is now done. 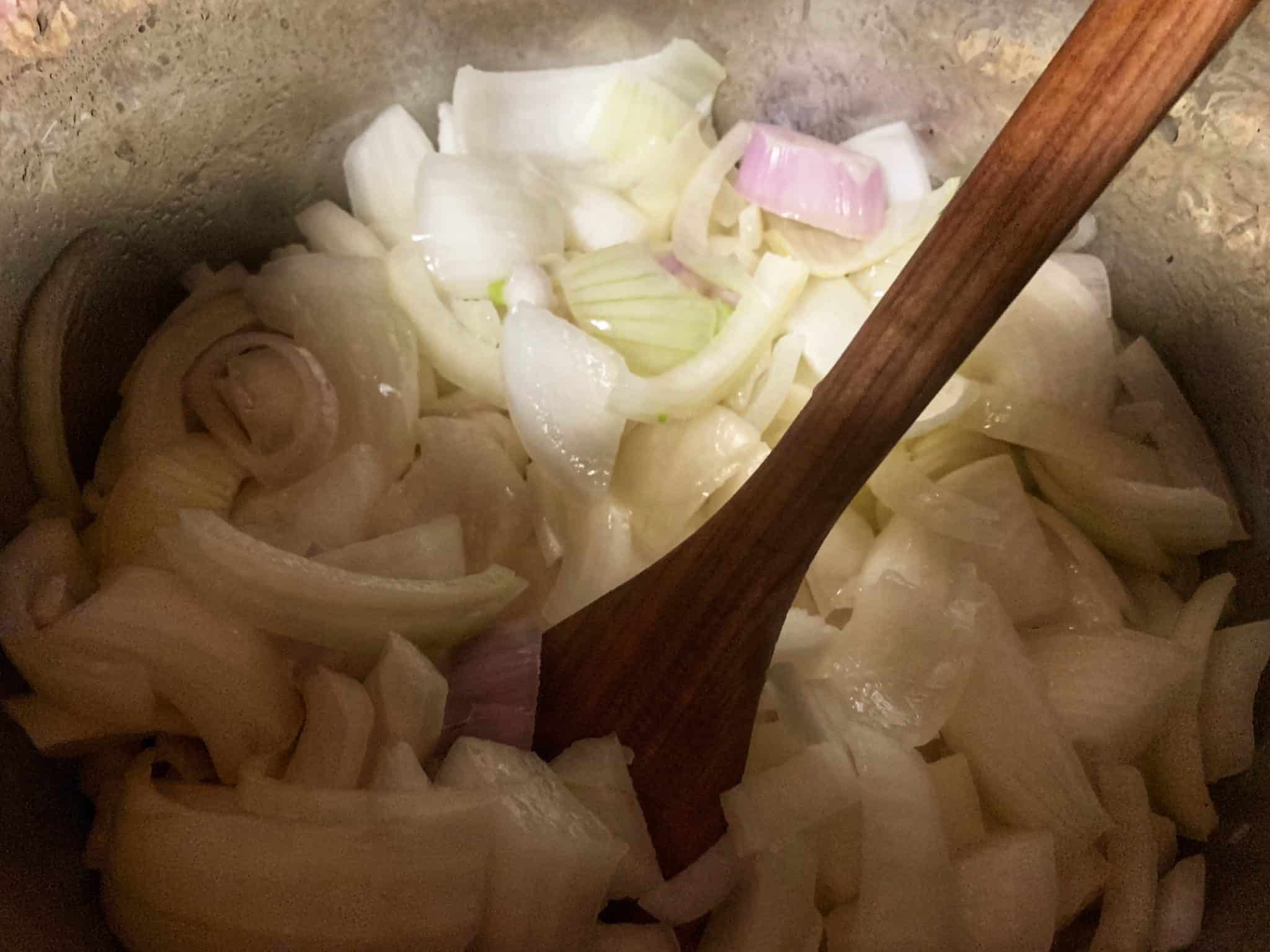 So for Instant Pot users, move the function over to pressure cook (high pressure) and set the time for 20 minutes, then allow an equal amount of time on natural release (where you haven’t released the pressure valve, but it’s no longer cooking). That’s when you get to kick back and have some “me time” <cue wine>. So after the 40 minutes are up (20 cooking and 20 sitting), unplug that bad boy and take it outside (or just away from wood and glassware) for a full release of the steam valve, unless you want steamed onion bits all over your hanging wine glasses, as I discovered once when cooking lentils. A slow cooker works just as well to make this recipe (a few hours depending on low vs. high temperature . . . ask your Google) or you can replicate this procedure in a pressure cooker (which is the function I used on the Instant Pot).

Sprinkle the bottom of every bowl with some parm (2 tablespoons?). I love cheese, so you can’t go wrong by me.

If you don’t have oven-safe/broiler-safe soup crocks, you’ll need to do some quick tricks as a workaround. Toast the bread separately—you can do this in a toaster or under a broiler—and then place the cheese on top of the bread and broil to your heart’s delight (I do it for about 3 minutes). Pop that sucker on top of your soup and you are gourmet AF. (Some cooks, i.e., not chefs, just throw the cheese on top of the hot soup and let it melt on its own, but that’s an amateur-hour move to me.) 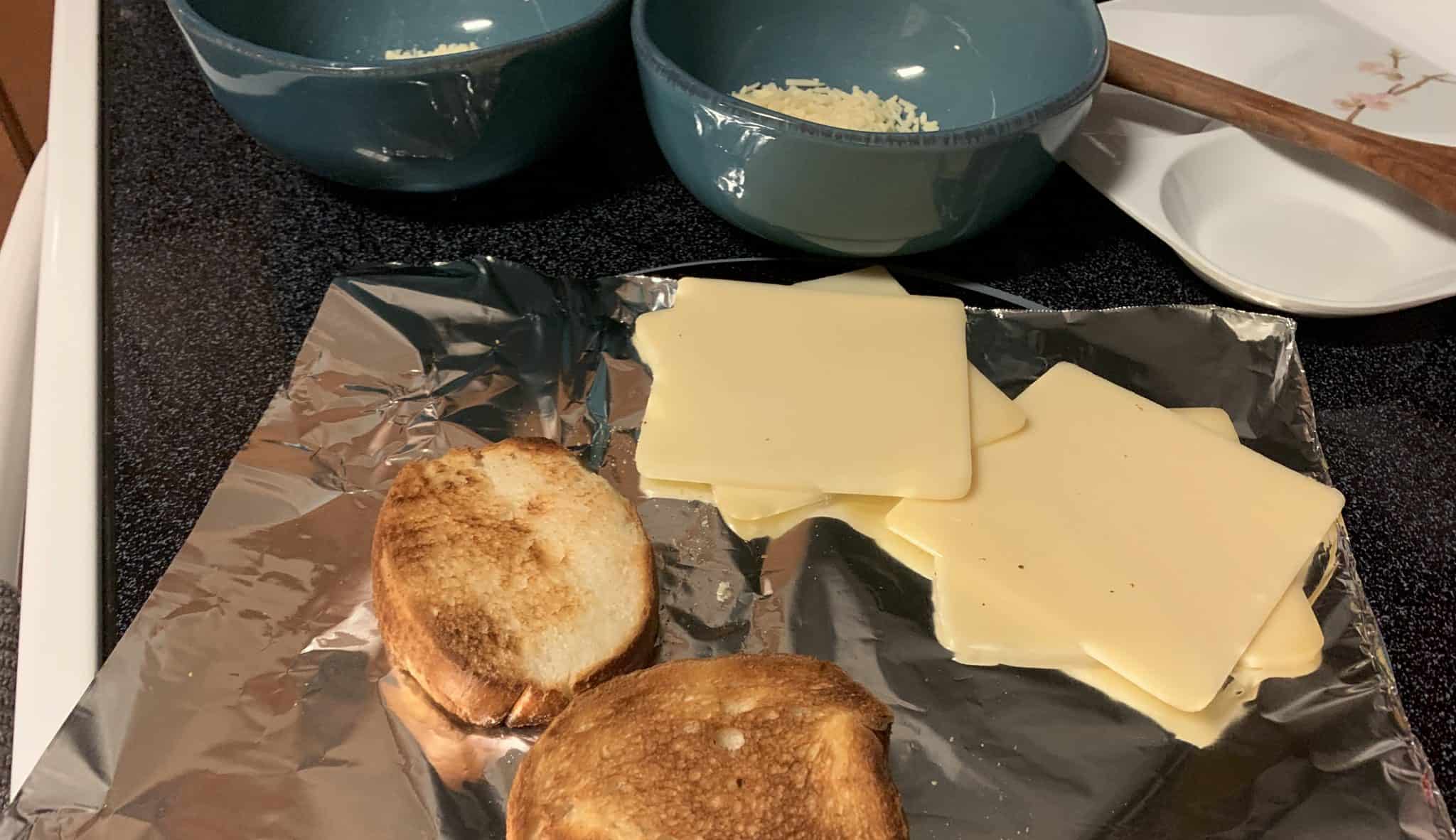 If you do have oven-safe/broiler-safe crocks, pile in the soup topped with the toasted French bread and cheese, and broil until the cheese melts. Just be careful, that crock will be hot, hot, hot! (The cheese that clings to the side is enough inspiration for me to go out and buy some new soup crocks.)

That’s it. Literally. Why would you pay for this when your own could be next level!?!

That’s basically two bowls of French onion soup at a restaurant (tip not included) . . . but this recipe makes NINE SERVINGS! (That comes to $2.09/serving.) Freeze half, have a dinner party, live on it for 3 days (or 1.5 if you’re sharing it). Since most calorie-counting sites (including Panera, which we in the ‘Lou call [St. Louis] Bread Co.) put it at slightly over 300 calories, eating it for three straight days wouldn’t exactly be recommended. However, I do think I could have this for breakfast, lunch, and dinner.

For less than $20, I literally made 9 servings of a soup that I LOVE. This would have cost $10 per bowl in a restaurant. Vive la soupe à l’oignon!!!! 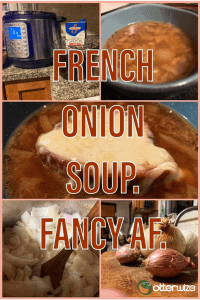 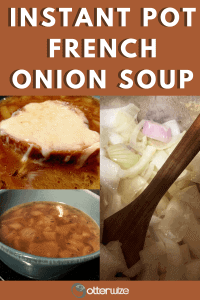 Money rules are not set in stone. Even if you have

Kindness is free. Pass it along. #kindness #kindne

Saying “I love you” is free. Writing someone a

Do you know the 5 factors that affect your credit

“The human brain still has many built-in evoluti

Today is National Pizza Day (just in time for the